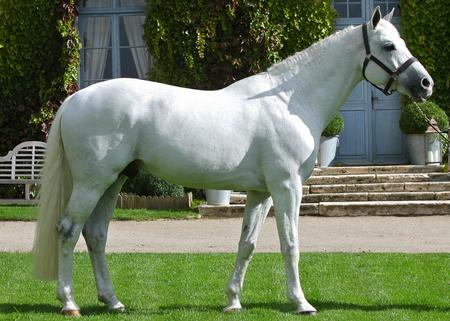 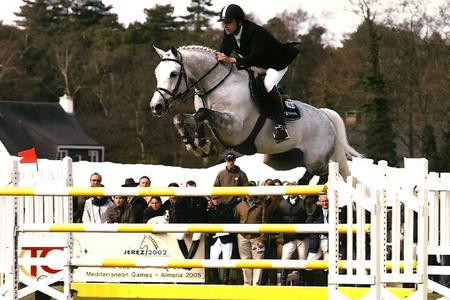 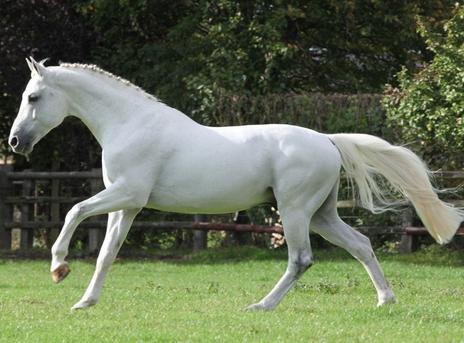 UTRILLO started his interrnational career at 7 yrs old in Belgium under the name of UTRILLO Z.
He has gone on to be ridden by his owner rider Walter Lapertot for the company PEGAZE BUCEPHALE with whom he obtained his first wins in Grand Prix at 8 years old.He was placed 4th in the GP in Paris,7th in the GP at Surgeres and was classed at the CSI in Chantilly.
At 9, UTRILLO was 6th in the GP at Palaiseau and was also classed at Deauville,Fonatinbleau,Hardelot, Jouy en Josas and at the CSI in Jerez de la Frontera. At 10, UTRILLO, started at CSIO level. He was 6th in the Nations Cup at Poznan and '4th in the GP.4th also in the GP in Comporta, 7th in the GP at Vichy, etc.

He was 436th in the world WBFSH ranking in 2007. After an accident in 2008 he came to Brullemail for a few months to collect and breed a few mares in June and July. He will be back in the show ground in 2009. His new rider was Franke Sloothaak in 2010. They won Porsche GP in May. In 2011, UTRILLO moved back to W. Lapertot and he won Puissances et placed in Grand Prix. Finaly, in July 2011, Brullemail stud farm bought him and now he is retired for jumping and only available for breeding.

As close as one can get to Cornet Obolenski's genetics!

but with a generous 8 straws dose!

The pedigree of UTRILLO VD HEFFINCK is very sought after as it produces outstanding offspring: CLINTON and a daughter of HEARTBREAKER !
His mother line is excellent and has given many international winners and stallions. His sire CLINTON was a top competing stallion, 2nd in the GP at Aachen, 4th in GP at Rome, Bronze Medal at the O.G in Athènes and many more great wins.
Even when he was young, CLINTON already had some of his offspring winning at an international level one of which was UTRILLO VD HEFFINCK leading the way, along with the olympic horse CORNET OBELENSKI, both of them bred from mothers by Heartbreaker.
He also has other winners like ALLEMACHTIG, BAGNI DI LUCA, ATLANTE, VIVALDO VH COSTERVELD, DANNY BOY, WYOMING, VENTURE QUEST, VIA VOLO, WHISKER all winners in CSI in 2008. 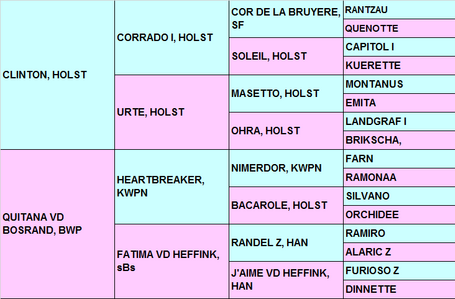 The CLINTON x HEARTBREAKER crossing is very much sought after as it is known to produce successful offspring: 13% of UTRILLO’s 9 yo and older SF are ranked in the WBFSH (2019), he is the sire of 45 French and Belgian winners in CSI. The stallion is the 16th best Sire in France despite a total production of 550 foals which is not a lot compared to other big names. 10 of his sons are also approved stallions (sBs, BWP, SF, KWPN & Z).

Some of his offspring (Belgium only): 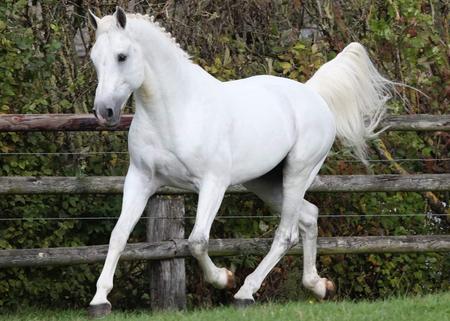 Utrillo is a medium horse at 1.68m who is easy to cross. He is a gorgeous horse, with a very nice neck: right orientation and length. He has a beautiful head with a wide forehead (common with the mix Clinton x Heartbreaker). He has a strong tight back (even at 23yo) with very good front and hind legs. He has 3 nice strides, he is very supple but moreover he has a lot of natural balance. Like many Clinton offspring, he has a heavy mouth but according to his owner, it is still a lot better than other stallions by Clinton.
Over the rail, Utrillo shows a very good technique (bascule) with a quick front release, and a perfect movement of the posteriors.

The stallion has a very good temperament and contrary to Cornet O, (his ¾ brother) his offspring are work oriented and  much more intelligent.
Folas by Utrillo are always refined with a lot of influx. Foals are grey or bay.