Miami de Semilly began his show jumping career as a 5 YO, in 2005 and he qualified easily for the French National Young Horse Championship in Fontainebleau.

He finished 4th in his age class and was ranked “Elite” stallion, and also finished 1st of the 5 YO Criterium (another well regarded Young Horse championship in France). In 2006, Miami was a finalist at the 6 YO French National Young Horse Championship.

In 2007, he competed in the 7 YO classes and started the 1.40m classes. In 2009, Miami started jumping successfully at the Grand Prix and CSI** levels. He was ranked 2nd of Grand Prix at La Boissiere Ecole, 3rd in Auvers Grand Prix, etc.

His promising show jumping career was cut short in 2011 when he was injured.

Don’t let the affordable price of his semen fool you! Miami de Semilly represents a rare opportunity to get an outstanding stallion for a very low price. Before he suffered a career ending injury, Miami was expected to become the “Next Diamant de Semilly”!  Many influential breeders in Europe breed to this stallion.

Miami de Semilly began his breeding career in 2007. His first offspring are very promising and show very good jumping ability, power, carefulness, reactivity, suppleness, etc. Among the offspring already indexed: Ula de Beaufour, 6 YO Grand Prix winner in Oliva CSI 2014; Ulrik de Vesquerie (ISO 125); Ultime de Quintin (ISO 110); Ultra Chic du Gonge (ISO 118); Une Image St Loise ISO 113 ; Urcy d’Auvers (ISO 110); Ushuaïa Semilly (ISO 128); Utamora de Vesquerie (ISO 111); Venda du Gite (ISO 112) ; Very Good Combraille (ISO 124);  Vive Etoile d’Elle (ISO 110); Volovent de Graffan (ISO 116) ; Voltigeuse Riverland (ISO 110). As Miami is not a small model (17h), we would recommend compact mares or mares with a lighter frame. He transmits his suppleness and his energy to his progeny, so he would fit mares that are lacking some fighting spirit. Miami also brings to his progeny, his jumping technique, lots of scope and his good temperament. Miami has a harmonious model with strong and well-proportioned legs. He is naturally balanced and has three elastic gaits. His canter is beautiful and active, and in the show ring, he exhibited a powerful and very careful jump with very good front leg technique. The “Miamis” have the perfect attitude for show jumping horses. They want to get across the fences, they are brave, powerful and careful. This trait is very strong in the Voltaire bloodline.

Miami combines the exceptional bloodlines of Voltaire and Muguet du Manoir. His sire, Voltaire was one of the most influential stallions in international sport horse breeding. He himself jumped internationally at the highest level, winning Nations Cup classes at Calgary, Stockholm, Lanaken, Helsinki, Wiesbaden and Wembley. With Jos Lansink in the irons, he ended his competitive career in 1989, winning the Grand Prix of Berlin. His influence amongst the European studbooks has been recognized for decades, having over 50 approved sons, with many offspring at the Grand Prix level. His sire Voltaire crossed very well with Selle Francais mares and is a cross of two outstanding bloodlines:  Furioso II and Gotthard. His sire Furioso II, an outstanding Selle Francais stallion, produced 200 State Premium mares, and over 70 approved stallions.  Voltaire was represented by a staggering 28 jumpers in the WBFSH standings for 2000/2001 – and ranked 9th in the top 50 sires in the ten years from 1991 to 2000. His dam is  the legendary Gotthard. 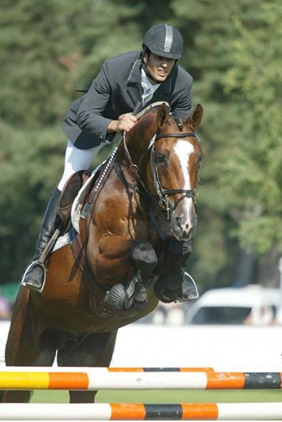 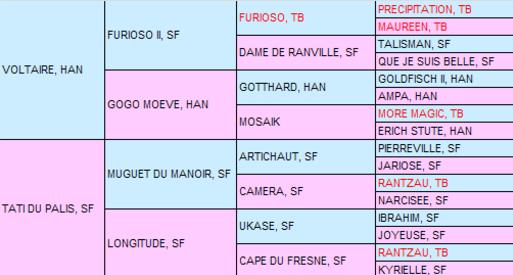