His sire, Diamant de Semilly, indexed 184, is without a doubt one of the best French stallions.  Not only does he have a top class French pedigree but has consistently proven himself in sport, and is now showing himself to be an outstanding sire. Bred for performance and ranked “Elite”,  Diamant has been consistently named “best sire of young horses” at the French championships in Fontaineblau.  He is one the most sought after sires in France and Internationally.

2001 – Reserve champion of the 3 YO French National young male championship.

2002 – Sacred champion of the 4 YO French National young male championship.

2003 – Qualified for the 5 YO French National young male championships.

2004 – Qualified for the 6 YO French National young male championships.

2005 – Placed in numerous 7 YO classes before being exported to Dubai.

2007 – Qualified for the Beijing Olympic Games.

2010 – Silver medalist (both individual and team) at the 16th Asian Games.

Since 2010, Kalaska succeeded to improve his show jumping index with wins and placings in CSI 3*,4* and 5* and Nation Cups (Abu Dhabi, Al Ain, Arezzo, Auvers, etc.).

“Kalaska de Semilly is truly the horse of my dreams! When I first saw him it was love at first sight, then riding him and jumping for the first time was just a whole other world from what I have ever ridden before.

We came together as a perfect team and we went through everything together.  My first proper Grand Prix was with him.  My first Asian Games were with him and to come back with a medal was amazing !  Then qualifying and being able to represent my country in the highest level (Olympics and WEG) was a dream come true !

He has done me and my country a huge honor!”

Kalaska began his breeding career in 2004.   He was ranked “Very Good” as Selle Français stallion.  He has harmonious conformation, complemented by strong legs, a beautiful top-line and a well set neck with a good neck and shoulder attachment. Kalaska is easy to breed.  He fits very well to mares with a larger frame. He transmits his scope, as well as his forward movement, his outstanding jumping technique and great mind.  Kalaska’s foals are pretty, supple, with energy and a strong back, show good balance, outstanding temperament and a very good jumping technique that is careful, with very good back movement. The quality of his offspring is very promising:  River Dance Semilly was exported as a 3 YO to Germany where he placed in 7 YO classes, in 2012.  He has then been imported to the USA where he is being shown under Paul O’Shea.  In Germany, a son of Kalaska de Semilly has been an approved Oldenburg stallion in 2013 and sold to Lower Saxony State Stud.  In Belgium, the owner of the well known Clinton and “van de Heffinck” breeding farm , Hubert Hamerlinck, has trusted Kalaska since the beginning and has been rewarded with a very nice stallion BWP approved, Jamal van de Heffinck. His semen is now available in the USA for the first time.

His dam, Normandy Night is by the renowned thoroughbred stallion Night and Day.  Great international show jumping winner herself,  she won many Puissances,  jumping 2,25m.   She ranked ISO 154 before being retired as a broodmare.  She has been a good producer of show jumpers:  Eloïse de Semilly (ISO 140, WEG Jerez 2002),  Ellena de Semilly (ISO 110),  Jazz de Semilly, (ISO 124),  Kolorado de Semilly (ISO 134). Kalaska is the result of the Haras de Couvain’s know how, combining strength and suppleness.  Kalaska (16.3h) is powerful and very respectful.  He has 3 beautiful elastic gaits,  is well balanced on his haunches, exhibits fantastic self-carriage and has an extraordinary temperament.

He is indexed ISO 169, which corresponds to “Excellent” within the French show jumping ranking.
Kalaska started his show jumping career in 2001, and retired in 2015 at the highest level. Such exceptional longevity! 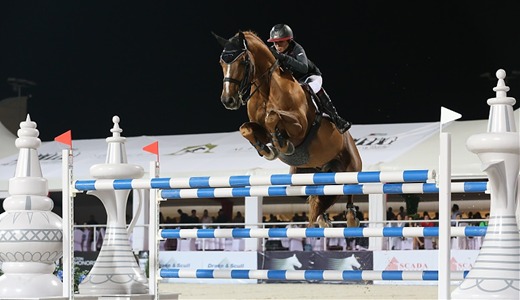 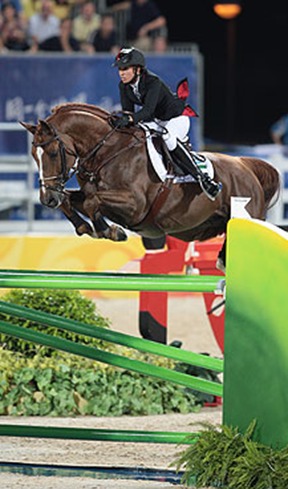 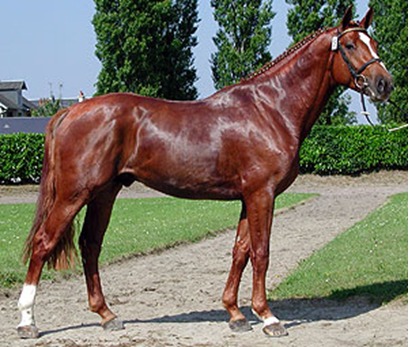