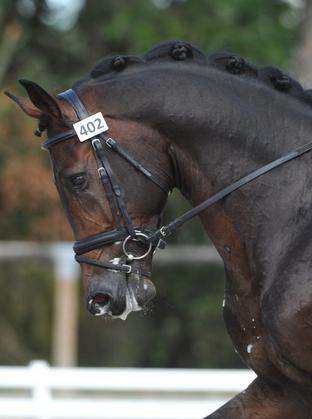 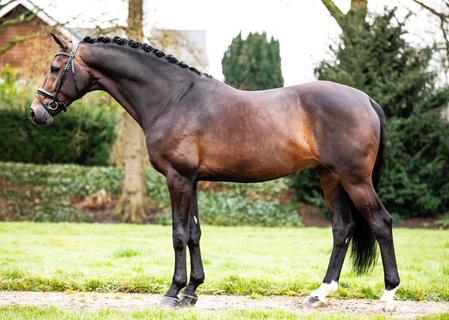 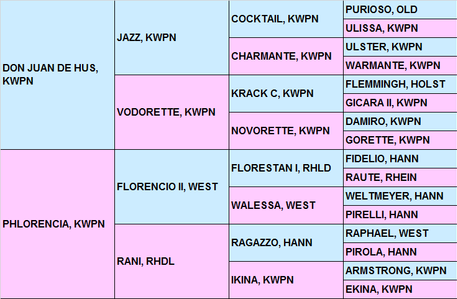 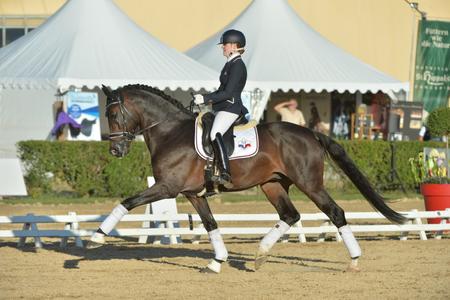 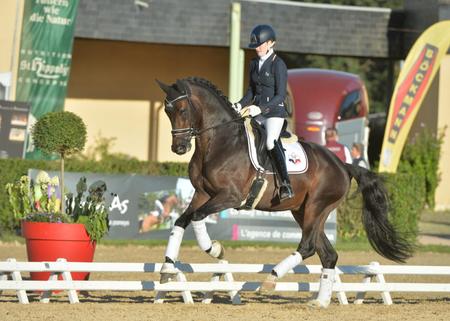 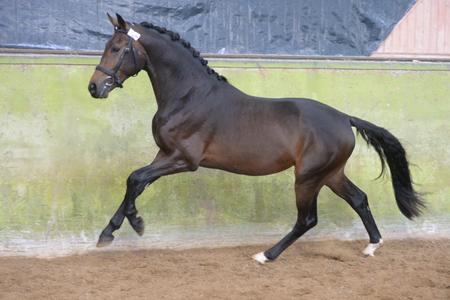 Diamond de Saint Val is one of the most promising stars of the SF Studbook (Dressage section). Bred for performance, he is combining the exceptional genetics of Don Juan de Hus (Jazz x Krack C) and Florencio (Florestan x Weltmeyer).
As a 2YO, he was reserve champion of the French Young Horse Dressage championship and Supreme champion at 3YO, he earned the “Elite” status at 4YO.
Diamond is chic and charismatic, supple and elastic; he inherited his exceptional canter from both of his sires and his hindquarters activity demonstrates a natural predisposition to collection.
On the top of his three great gaits and style that make all Dressage enthusiasts dream, he has a remarkable mind. He is easy to handle and is very human oriented.

His sire Don Juan de Hus is by the all-time number one Dutch dressage stallion, Jazz, and out of a mare, by the Dutch dressage team member, Krack C. At the 2010 Westfalian Stallion Licensing, he was named reserve champion. He went on to win the 30-day Stallion Performance Testing in Schlieckau with the best final dressage score of 9.25. Don Juan won all the 4YO old competitions he participated. He became the 2012 French Young Horse Champion in Saumur with a 93.639%. He scored 10 for trot and 9.8 for canter in the final test. As a 5-year old Don Juan de Hus received a 10 no less than 6 times in his first show of 2013.
He placed sixth in the finals at the 2013 World Championships for Young Dressage Horses in Verden, Germany. Jessica trained Don Juan to Grand Prix but in 2015 the stallion started to have problems with hoof cracks, that kept him from making his Grand Prix debut.
He enjoys a great career as a breeding stallion. At the 2017 World Young Horse Championships in Ermelo, the 5-year old Don Martillo (by Don Juan x Benetton Dream) became World Champion and the Hanoverian licensed stallion D’Avie (by Don Juan x Londonderry) finished sixth.
In 2018, d’Avie won the Six Year old title. Don Juan has already sired 14 licensed sons. D’Avie had sold at auction for €620,000 as a two and a half year old. Other approved sons are Don Farinelli, Duvalier, Don de Hall, Don Jon and D’Egalité, the champion of the 2015 Westfalian Stallion Licensing, who also sold for €620,000 at auction.
His dam, Phlorencia (Florencio x Ragazzo) is the dam of Urielo du Houx de Saint Val, who after winning several times the French Dressage championships, performs today at the highest level.
His 2nd Dam, Ranie, is Ekina's granddaughter. Ekina is the stallion Lichterloh’s sister of and the dam of the stallion Aquilino's son. This is the bloodline of the stallions Cabochon, Varitas and Kingston, Grand Prix dressage winners.